[Posting from the Sony Center at Potsdamer Platz, which has free wireless internet] 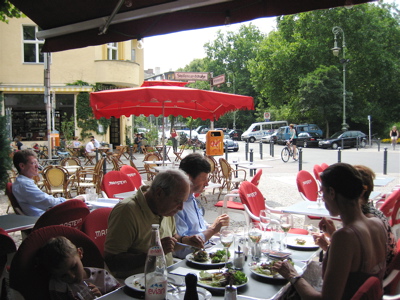 Here is a view from an indoor table at Café Manstein, just down the street from the flat. The coffee is excellent, and they have a great atmosphere. For example, when we had coffee there this morning, before heading off to our separate work-places, they were playing a series of Johnny Cash/Carter Family songs on the stereo.

They also serve this fantastic chicken salad which I’ve never ordered but which must be very popular because nearly every time we’re there the smell of it cooking is simply to die for. I think that you can also order the chicken with a pasta. I will have to try it soon because it smells *so* good. 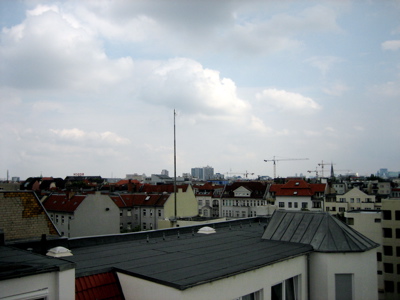 This is a rooftop view from last week (hot week) facing west. The bright sky and dark rooftops prove to be a bit challenging for the digital camera. Nonetheless, this gives a sense of the 360-degree view from the terrace. 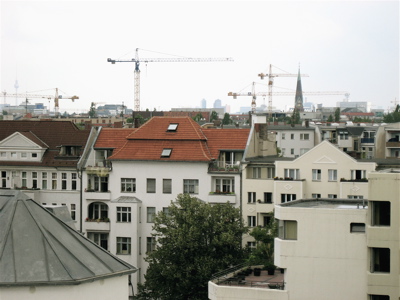 Facing east one can see the TV tower in the former GDR at the left of the image. As you can see, there is plenty of construction; the economy seems to be doing fairly well. The view is much more clear this week than last, without the haze of the 40-degree weather. 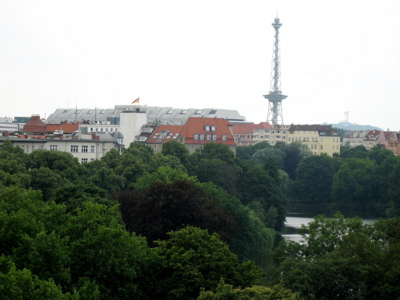 From the terrace one can also see the Lietzensee, a nice lake with a very pleasant park and footpaths surrounding it. In the photo of Manstein the trees in the right of the image are the start of the Lietzensee park.

My first week here I went running in circles around the lake, but lately I have been running around the Schloß Charlottenburg, which is about one kilometre from the flat. There is a really nice park grounds around the castle, plus there is a river next to it with footpaths along both sides. A great place to run.

Most evenings there are classical music concerts at the Schloß. Also, they are gearing up for the comemoration (but not necessarily celebration) of the 200-year anniversary of Napoleon’s arrival at the Schloß, after the defeat of Prussia and its allies at the battle at Jena.