I’ve been keeping regular (noon-8pm) hours at the library. Students don’t have circulation privileges, so all of the books I have needed are quickly located.

I’ve finished the first draft of the English reading list (about 40 titles) for my exam, and have now moved on to the Americans. The period I’m working on is 1730-1848, and it’s very difficult to narrow the list down that much (with more trimming to come).

I started with about 120 titles (which took several days to compile) and then trimmed based on what are arguably essential texts and what I think are interesting texts. One problem is that I’m also including philosophy, religion, and history, in addition to novels, poetry, and letters. 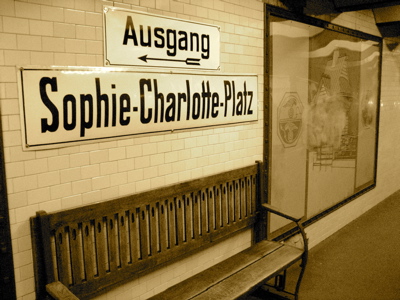 Each subway stop is very different, one of the things I like about taking the tube everywhere. This stop is nearest to where I’m staying; It has what I imagine to be a pre-war feeling about it. 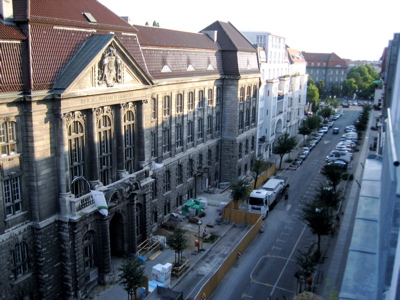 This is the view facing south from the large living room windows in the flat where we’re staying. The flat also has a roof terrace with great views all around. We eat dinner up there most evenings. There is a great café and also an excellent restaurant very close (less than 30 metres).

The building across the street was the Reichs Militaer Gericht (State Military Court) under the Nazis and before. It is currently being retrofitted and converted into very up-market flats for rent. 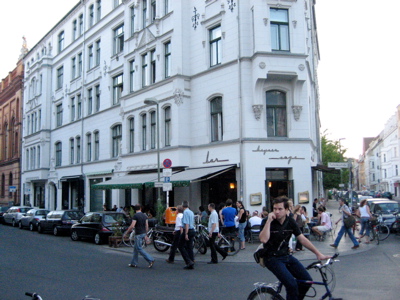 This is keyser sose, the first cafe in Berlin that I went to three years ago. It’s in Mitte near Oranienburger Straße on Tucholsky Straße. I found it again last summer without even looking (I didn’t even remember the name). I liked it then as well but this visit the area around it is much nicer (Mitte is no longer the large-scale (re)construction zone it was during my previous visits) Last week I stumbled across it again, although I think that I now like this restaurant called “ruz” rather than keyser sose.

Although, I do have very fond memories of keyser sose, including one from last summer when the entire female wait staff sang along (impromptu: it was mid-afternoon and there were few patrons) at the top of their lungs to a loud playing of Ray Charles’s “Hit the Road Jack.” When they finished, they replayed the track and sang again. It was splendid.