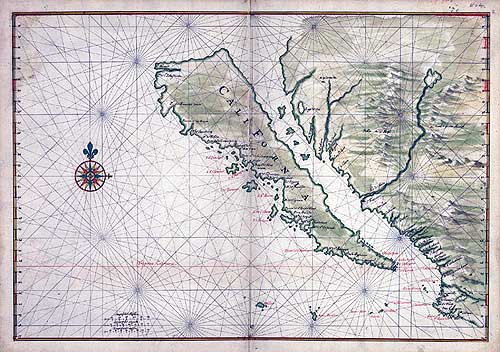 One of the most famous misconceptions in cartographic history is of California as an island. The origin of this error is Las Sergas de Esplandian, a romantic novel written in 1510 by Garci Rodriguez de Montalvo, stating “that on the right hand of the Indies there is an island called California very close to the side of the Terrestrial Paradise; and it is peopled by black women, without any man among them, for they live in the manner of the Amazons.”

This idealised view of California as a kind of Garden of Eden at the edge of the known world was negated by Father Eusebio Kino’s expedition from 1698 to 1701. Kino proved that Baja California, the (currently Mexican) peninsula which runs parallel to the mainland for hundreds of miles, is connected to it in the north.

Doubts remained, however, and the issue was finally laid to rest only with the expeditions of Juan Bautista de Anza (1774-1776).

It is somehow fitting that California, now home to the entertainment industry in general and Hollywood in particular, itself should be named after a fictional place first mentioned in a novel. Baja California was discovered in 1533 by a mutineer from Hernan Cortes’s expedition into Mexico, followed by a trip by Cortes himself to that area (near present-day La Paz, on the southern tip of the peninsula). The lay of the land led him to believe this to be the island of “California” from Montalvo’s novel.

The issue may have been negated in 1701 and laid to rest in 1776, however the view was effectively and permanently resurrected in 1866 with the founding of the city of Berkeley.