“An aloneness unknown to man before”

The Guardian has an excellent write-up about Michael Collins, the Apollo 11 astronaut who stayed in in Columbia while Aldrin and Armstrong were in the lunar lander, and the astronaut who has fared best, post-mission. 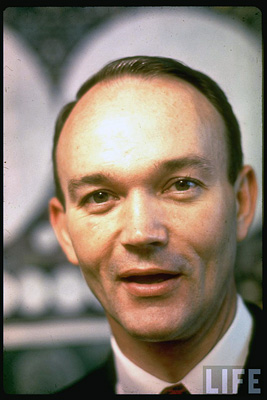 Then, on 20 July, Armstrong and Aldrin crawled into Eagle and flew it down to the Moon’s surface. “Keep talking to me, guys,” radioed an initially panicky Collins as the pair drifted away from his ship.

Minutes later, Columbia swept behind the Moon and Collins became Earth’s most distant solo traveller, separated from the rest of humanity by 250,000 miles of space and by the bulk of the Moon, which blocked all radio transmissions to and from mission control. He was out of sight and out of contact with his home planet.

“I am now truly alone and absolutely alone from any known life. I am it,” he wrote in his capsule.

“My secret terror for the last six months has been leaving them on the Moon and returning to Earth alone; now I am within minutes of finding out the truth of the matter,” he wrote. “If they fail to rise from the surface, or crash back into it, I am not going to commit suicide; I am coming home, forthwith, but I will be a marked man for life and I know it.”

A fascinating portrait, and one of the best aspects of the mission which has emerged in greater detail during this anniversary.